Joseph was named afier his father and was the first child of Joseph and Mary .

Joseph appears on the 1851 census records still presumably single aged 40 and living with his parents Joseph and Mary .
He must have met and married Sarah after 1851 and before 1861 and they seem to have had no children that appear on the census records.

Unable to find Joseph on the 1841 Census records.

Looking at the 1891 Census records we find Sarah is a widow and living as an inmate of the Stone Union Workhouse, in Stone in Staffordshire.


It seems that after Sarah's husband Joseph died in 1882, she was left a widow with no children to help her, She would have been left with no alternative but to give up her home in Fair Oak
and move into Stone Union Workhouse. A sad reflection of these times it seems.

John was the son of Joseph Walters Austin and Mary Butter. He appears on the 1851 census records aged 30 a stone mason and living with his parents in Croxton.

He married Martha Clark at St Paul's church in Croxton in 1860, he would have been aged around 39.

John and Martha went on to have seven recorded children.

From the above census record, son John appears to have been born in 1854 six years before the marriage in 1860 at Croxton St Pauls.


From the above 1881 census record.
We can see that the family have moved away from the rural life in Chatscull and now live in Hanley where the children are  working in the Pot Banks and John seems to have died
leaving Martha to bring up the children alone.


The census record above for 1891 sees Francis is now known as Frank and the family have moved to 20 Mayo Street in Hanley.

The 1901 census records show little change. Martha is still living in Mayo Street with Henry Frank and Ada who are still unmarried and working in the Pot Bank.

The 1911 Census record show that Henry and Francis are still living at 20 Mayo Street in Hanley with the same Boarder Louisa Wagg.
Presumably Martha has died as she is no longer mentioned on this census record, and if living would now be 81 years old.

The 1911 Census records also show that Ada is now married to Arthur Toft and living at 13 Gordon Street in Stoke on Trent with his children.

Ada married Arthur at St Johns in Trent Vale in 1905. Staffs BDM ref 32/03/161.
This is Arthur's second marriage the first was to Florence E Wilbraham at Holy Trinity church in Hartshill in 1894. Staffs BDM ref 16/03/161.
The children would be by Arthur's first wife Florence who presumably has died.

Thomas was the third son born to Joseph Walters Austin and Mary Butters .

Thomas was christened at Eccleshall Holy Trinity church in 1809 although the IGI records seem to pick up several christening records for a Thomas Austin including two for 1816.
Thomas was married twice and had a total of twelve recorded children, four by his first wife Elizabeth and eight by his second wife Emma.

The 1841 census record shows Thomas living with Elizabeth in Mucklestone he was working as a agricultural labourer and they had no children.


Note: William is recorded as a scholar although he is only aged 3.

then married in 1886 in Swynerton Staffs. 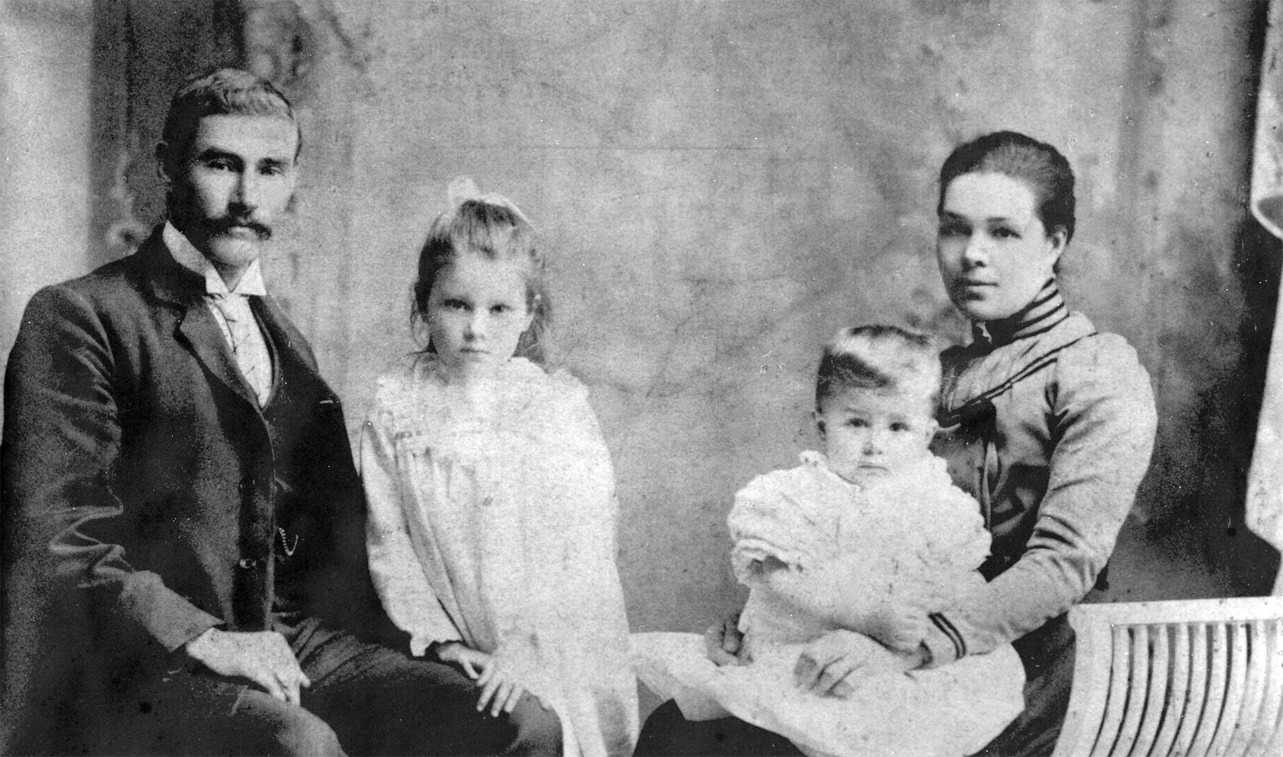 Photo taken around 1901 and kindly supplied by Colin Graves .


James was born in 1865 and was the son of James and Sarah. By the time he was 30, he was living and working in Farnham in Surrey as a postman. He also got married when aged 30 to Margaret Ellen Hole .

James blagged his way into the army as a 16 year old and went to serve in India. By 1900 he was back in the army fighting in the Boer War. His peace time job was working as a postman in Farnham.It is asssumed that he must have been bored as a postman and hankered after the excitement of serving in the army because by 1914 James had enlisted again at the age of 49!!! even though his wife had died 2 years previously, and so off he went to war leaving his family of 7 children to fend for themselves. When he died in action the following year his daughter Margaret Ellen Austin had to bring the whole family up and she was only 18 years old.

James died at Gallipoli on 12th August 1915 and the following is taken from the Surrey Advertiser.

An extract from an article in the Surrey Advertiser. (The second half of the story is missing)

Mr G.E. Aldridge, J.P., Chairman of the Farnham Urban Council, has received the following letter from Bugler W Kite, 2/4th, the Queen's, giving some particualrs of the death of Pte. J. Austin, of Farnham, whose name appeared in our casualty list recently. Writing from the Convalescent Camp at Malta, Bugler Kite says:

In reading the account of your Council's resolution of sympathy with the family of Pte. J. Austin, in the Surrey Advertiser, it appeared evident to me that you had not heard how our comrade met his death. On the last day of four days of glorious fighting, there were four wounded comrades who had been lying a few yards behind our line, who could not be removed for the time being. We had that day had the luxury of milk and jam to accompany our biscuits, and Pte. Austin's first thoughts were to give a share of his milk to the wounded. Word was sent to our Captain, and he came down to Pte. Austin and told him to come up to his dug-out for a larger supply for the wounded. He made a second journey for them, although both journeys meant risking his life, as we were being terribly worried by snipers. It was just as he was crawling back to his place in the firing line that he was wounded. All the men of Platoon 16 saw him hit, and we hardly expected him to survive, as he was so badly wounded. So when things were a bit quiet his mates jumped out and laid him down with the ones he had just been succoring (they were all lying in a bit of hollow ground), and at evening they were able to bring up the stretcher bearers.

The Gallipolian Spring 1994
An article by Jim Fallon .

In April 1993, a letter in the Southern Echo publicising the Association struck a very sympathetic chord with Mrs Margaret Samways of Southampton. She had just learned, as she researched her family history, that her grandfather James Austin had died at Gallipoli. As a result she contacted me to learn more about her grandfather and at the same time join the Association. From this chance beginning she has successfully obtained pieces of the jigsaw on her grandfather's life. It has led to contact with previously unknown cousins, while developing an ever growing and fascinating story which shows what can be achieved as a result of dedicated family research.
Investigations with the Records Department at the Duke of York's Military School at Dover revealed that James Austin had served in the Boer War and in India for a period of 7 years and 8 months. He worked at the Academy for a time and then joined the Post Office at Farnham, Surrey, where he acted as a rural postman. When war broke out he gave a false age to enlist, having reduced it by 4 years, and was accepted in the 2/4 Battalion, The Queens Royal West Surrey Regiment.

James Austin had married in 1897 and he and his wife initially lodged with a very well known Farnham character, Harry Hole, who later became a Chelsea Pensioner. They had 7 children. One son aged 13, saved the life of an Aunt from under the hooves of a runaway artillery team (Dover) but was trampled to death in the process. Mrs Austin died in 1913 and is buried in Farnham Churchyard. The tombstone includes Also of Austin, husband of the above, who died of war wounds received in action in the Dardanelles, August 1915, aged 45 years.
James Austin is also commemorated in Farnham with 3 other Post Office employees who lost their lives in the War, while his name also appears on the town War Memorial.

A Farnham newspaper of the time reports a letter from Bugler W. Kite of the 2/4 Bn. The Queens:
On the last of 4 days of glorious fighting there were 4 wounded comrades lying in the open who could not be moved because of the intensity of enemy fire. Rations were delivered and included milk and jam to accompany the usual biscuits. Pte. Austin volunteered to go out to the men with food and water and made 2 journeys and at all times he was the subject of heavy sniping by the Turks. On the second trip he was crawling back to the trench when he was hit. The men of his Platoon, Number 16, saw him hit and hardly expected him to survive as he was so badly wounded. When things went a bit quiet his mates jumped out and laid him down with the ones he had been succouring and they were placed in a small hollow for protection, and then stretcher bearers were able to come up at night, and take them away.

The Queens Roll Of Honour and Soldiers Died In The Great War state: J. Austin [enlisted at Farnham], Died Of Wounds, HMT Transylvania: believed drowned 12 August 1915.
This last entry is a puzzle and Margaret Samways would be pleased to hear from anyone who might throw more light on her grandfather and of his service and subsequent death in Gallipoli. Information please to Mrs Margaret Samways, 35 Cedar Avenue, Shirley, Southampton, SO1 5GX. 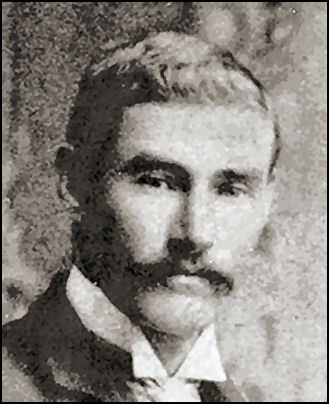 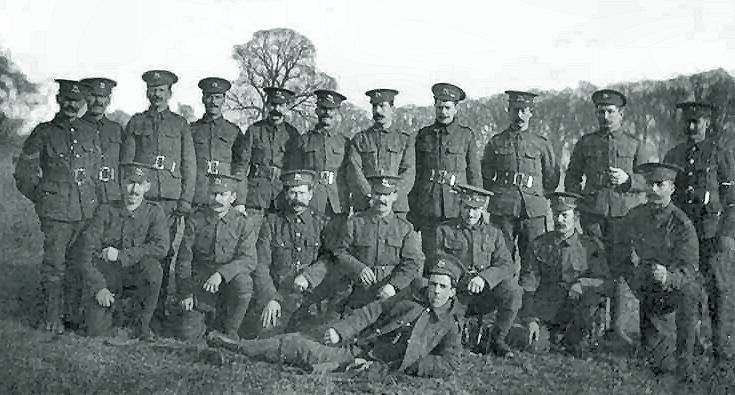 About 1914 James Austin is 4th from the left on the back row. 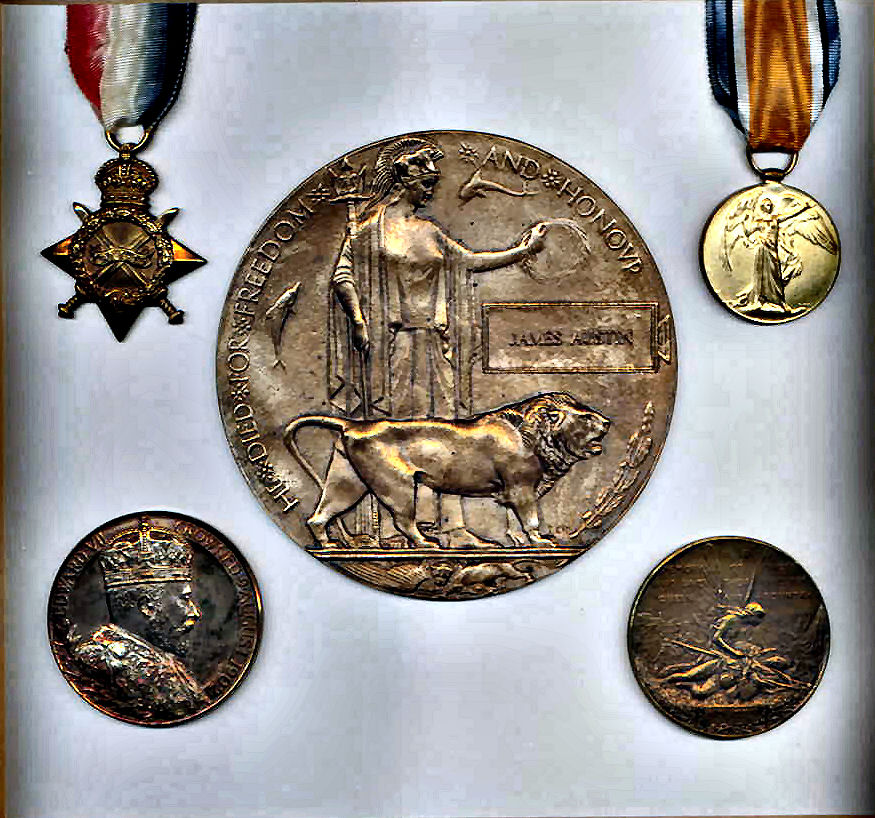 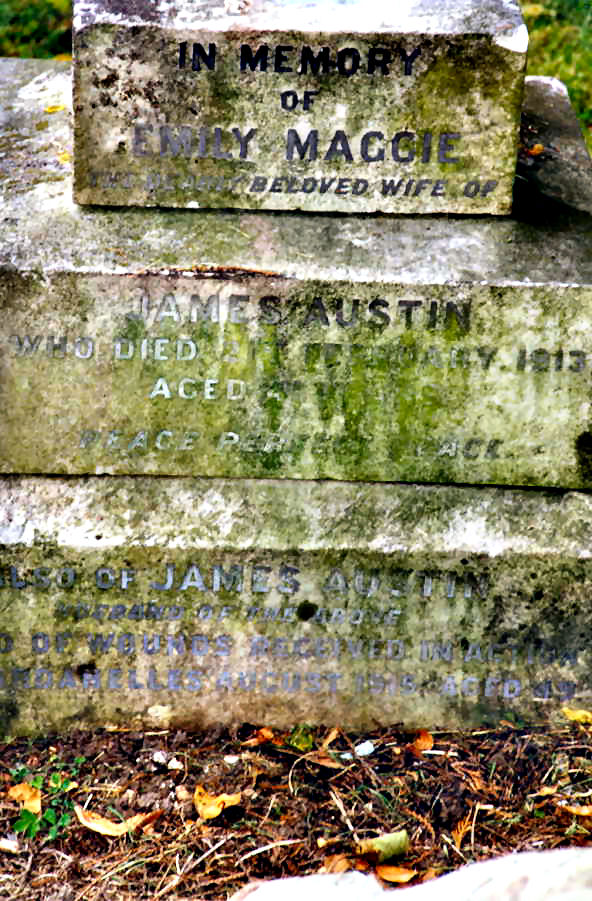 Grave in Sulva Bay and Headstone in Farnham Surrey.


Headstone inscription reads:- "Also of James Austin, husband of the above (Emily Maggie)
who died of wounds received in action at the Dardanelles (Gallipoli) August 1915 aged 49. 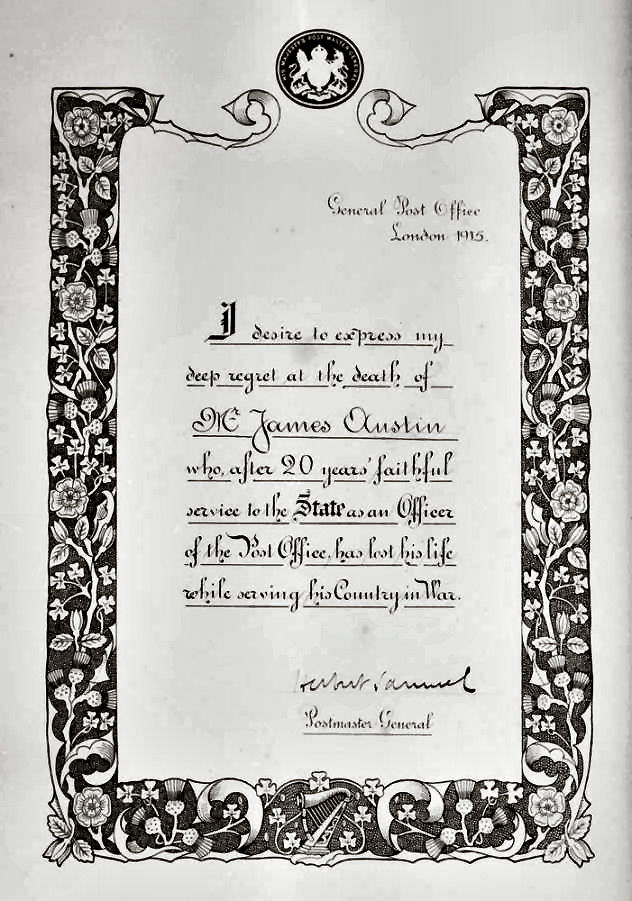 Many thanks to Colin Graves for the photographs.