Samuel was the eldest son of Henry and Mary Dale.

Samuel has one child a girl named Gladys Anne Dale.

On the 1901 census records Sam is a 14 year old boy working in a local Pot Bank as a Potters Pressers Assistant.

Staffs BDM shows that he married Mary Ellen Roberts in Stoke in 1909. Thomas and Emily Rowe were his witnesses (his sister and brother in law).

For whatever reason the 1911 census records reveal that Mary Ellen is living with her mother Emma Roberts a widow aged 57 and her daughter who is named Gladys Annie Dale and aged just six months. They are residing at 15 Canning Street, Fenton. Mary is working and the job  is described as transfer patterns, again presumably at a local Pot Bank.
Samuel Dale is meanwhile living at 38 Queen Street in Fenton with his mother, and brothers and sisters. The 1911 census also shows that his father Henry Dale has died.

Samuel has also changed his job and is now working at a coal mine as a loader :-

description of mine loaders job:-

Loaders, inside, bituminous. Shoot or blast coal from veins or beds after it has been undercut by machine miners and then load the coal into cars with coal-loading machines. In some mines they do the timbering; that is, set props or timbers to prevent the falling of slate, stone, and earth into the rooms of the mines; also lay tracks in rooms of mines and keep rooms in good working condition.

Loaders, outside, anthracite. Load coal into railroad cars and refuse into mine cars.

In 1914 when Samuel filled in the forms to enlist on his short army career. Mary Ellen is still not at the same address as her husband Samuel and is living at 2 Park street in Fenton.
Samuel's address is given as 47 Queen Street Fenton.
He is also changed jobs again and is working as a collier. (see forms below).

A description of Samuel Dale

From the medical forms Dated:18 August 1914. we can get an idea of his description.

By 1914 and the outbreak of the first world war he is working as a collier at a local mine when it seems that Samuel volunteers to join the army and enrolls with The North Stafford Regiment.

For whatever reason Samuel deserted the army very quickly after signing up. We know that he made his way back to Stoke - on- Trent and spent the rest of his life dodging the millitary police and living for short spells of time at various brothers and sisters homes. My mother remembers him well visiting her home regularly in Goldenhill and also says that he spent time living in a garden shed belonging to his brother Harold. Wether he saw his wife Mary or indeed his daughter Gladys Anne much or at all we may never know. The fact being that he led an uncomfortable life from 1914 when he deserted until around 1950 (possibly) when he passed away a period of some 36 years. I think it may be an exaggeration to assume that he would have been shot for desertion but he would have certainly gone to jail for the offence.

My mother also remembers that her mother had made salad for a meal and that Sam couldn't eat the tomotoes because the acid in them caused him severe indigestion. Probably by this time a poor diet and an unhealthy life style were having their effect on his health.

My mother was born in 1931 and so we know the dates she remembers to be around six or seven years after she was born. Mid thirties onwards.

Some stories that have been passed on to me by my mother:-

My Mother being - Mavis Caton .

Samuel Dale who was my Grandmothers brother joined the North Staffordshire Regiment on 18th August 1914 he was posted to Poole in Dorset and deserted the army on 7th October 1914. I have know idea why he deserted after so short a time. Samuel was noted as being a bit of a rogue. Grandmother said that when AWOL he went into hiding in Goldenhill at her house and hid knuckle dusters down the loo. Another story was that when in hiding from the military police he was in a urinal in Goldenhill and came out peeing on the redcaps. Another story is that Sam when AWOL went to the pub dressed in disguise as a woman.

Obviously the military police were still after his capture long after the war had ended.

The horrors of the first world war are well documented and surely it is not up to us who were not there to decide or pass judgement on the subject of desertion. (the author). 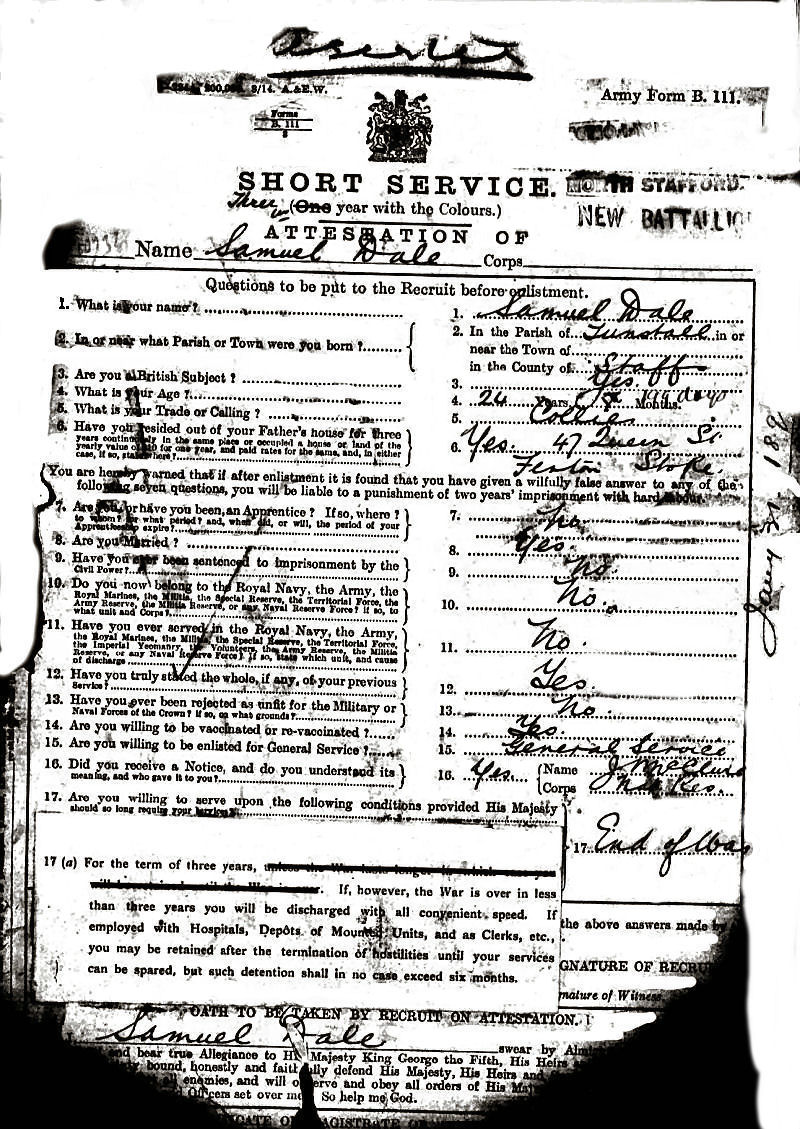 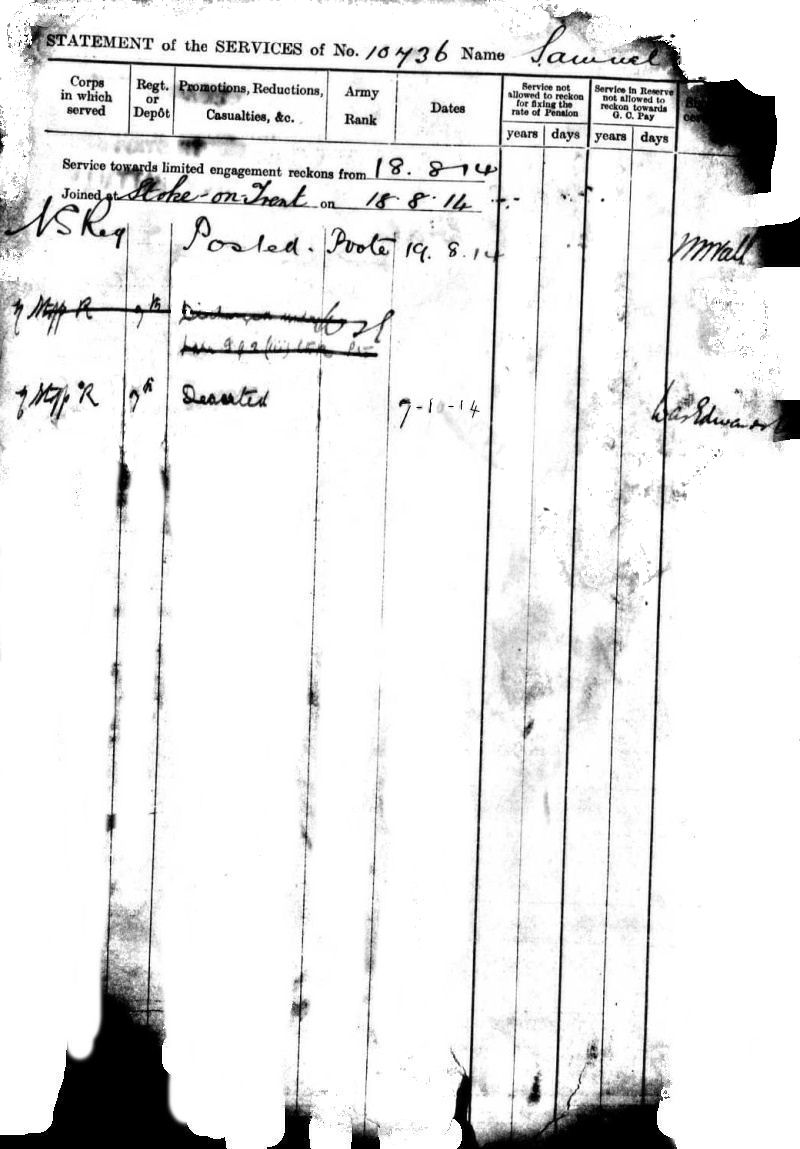 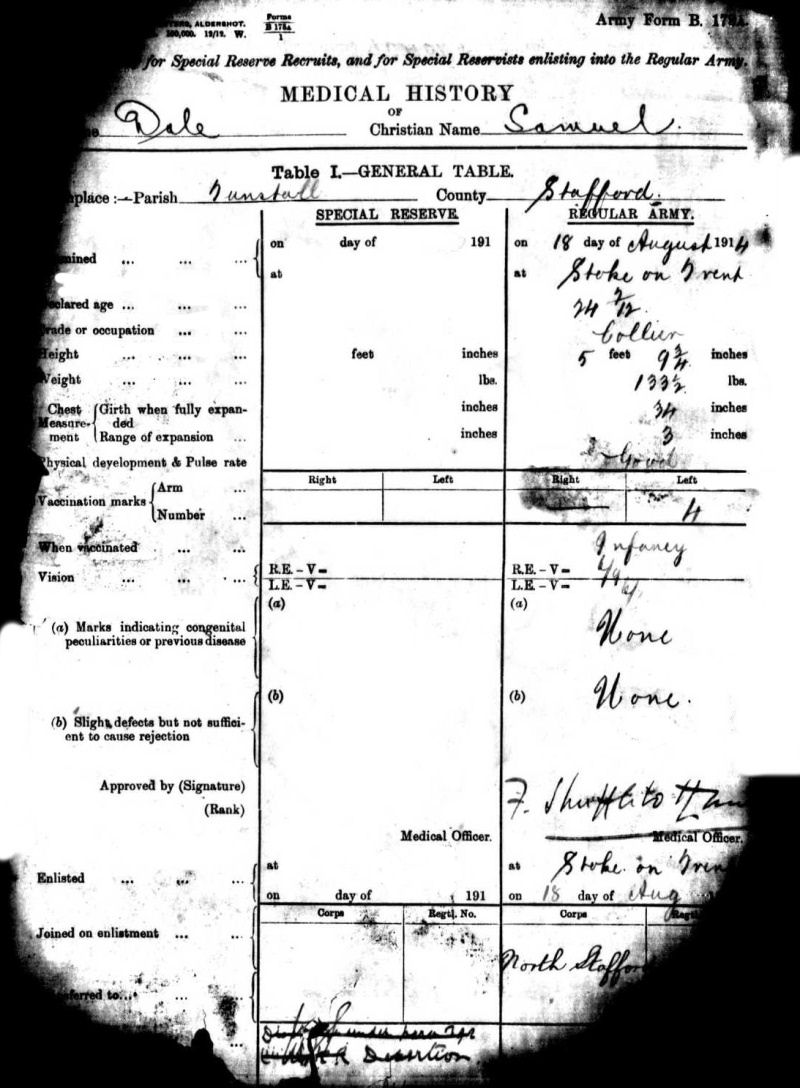 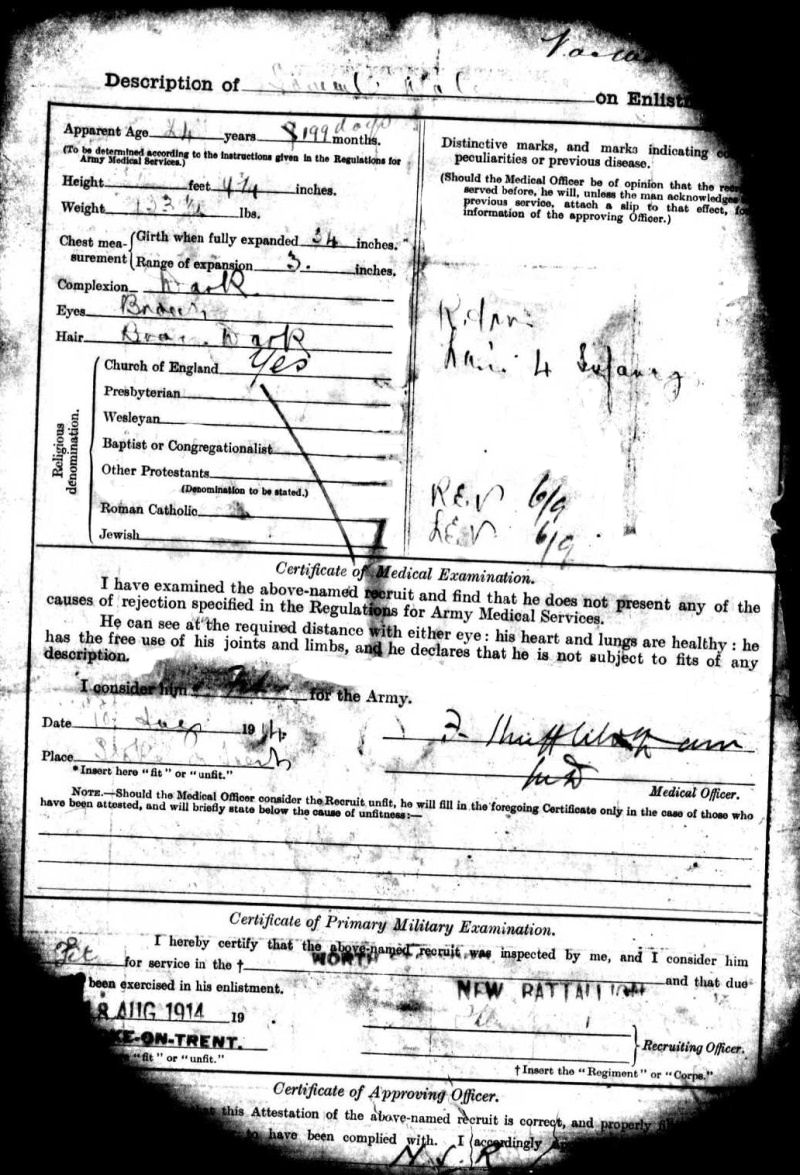 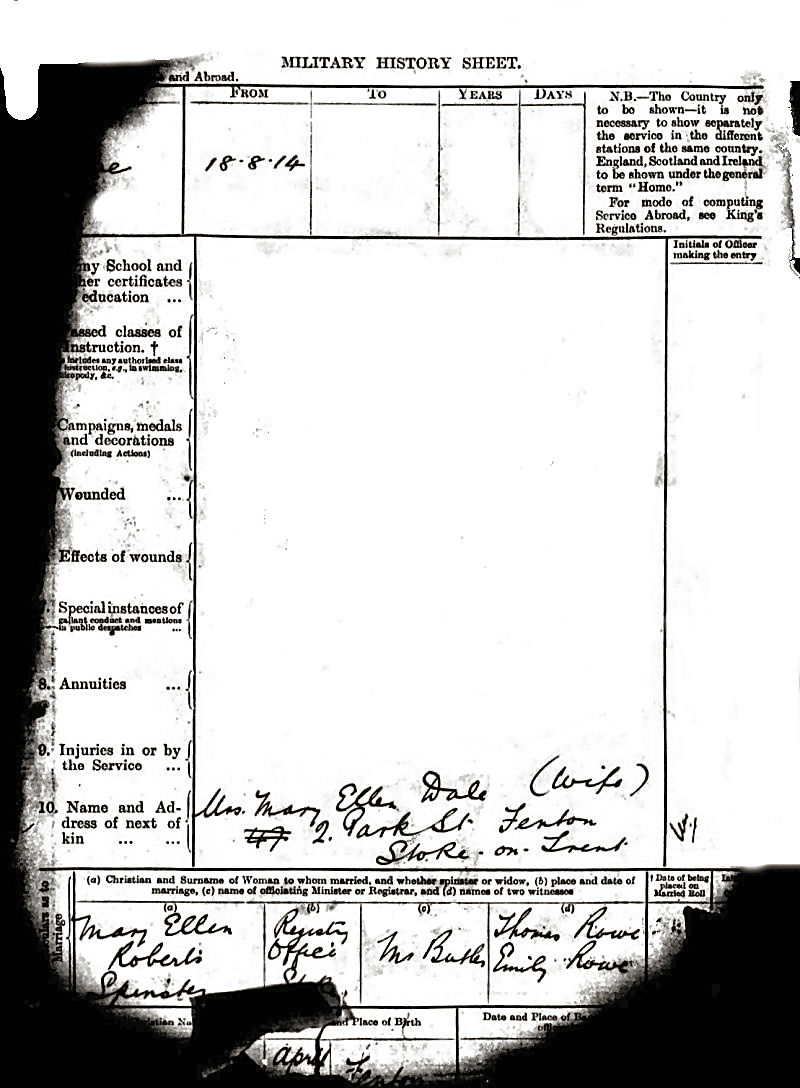 My mother knows as a FACT that she went to Blackpool with her sister Ada and Gladys Dale , my mother was born in 1931 so this event happened after this date say after my mother was five, so around 1936 for this event. My mother also remembers going to Coventry with Gladys when the war was on and seeing the barrage balloons. So 1939 to 1945 are the dates for this events.

I originally thought that this Gladys would be too old to fit the profile of Sam's daughter. But after examination I am beginning to be convinced that Gladys Dale who took my mother to Blackpool was Sam Dales daughter. My mother remembers Gladys being older than her sister Ada, I first thought that this would be one or two years but twelve years still makes this possible.

Gladys also took my mother to Coventry when the war was on, Gladys would have been around the age of thirty, and again this is a probability. Gladys may have been in service as my mother remembers staying in Coventry for a few days. Gladys was still not married at this time.

A story from Blackpool.

The story from Blackpool that my mother (Mavis) remembers is that Ada and Gladys and my mother went on holiday and were staying in a guest house in Blackpool, Gladys and Ada went out leaving my mother on her own, but with instructions to lock the door after they left. When they returned my mother could not unlock the door and so they had to get the landlord who got ladders and climbed in through the window. Apparently they were both told off by Ada and Mavis's mother for leaving Mavis on her own when they returned home after the holiday.