Links to the CWGC Casualty Details.

Links to the Battle of the Somme CWGC.

The Plaque was kindly given to me by James Goodwin.
It had hung on his wall for a long time. I thank him dearly. 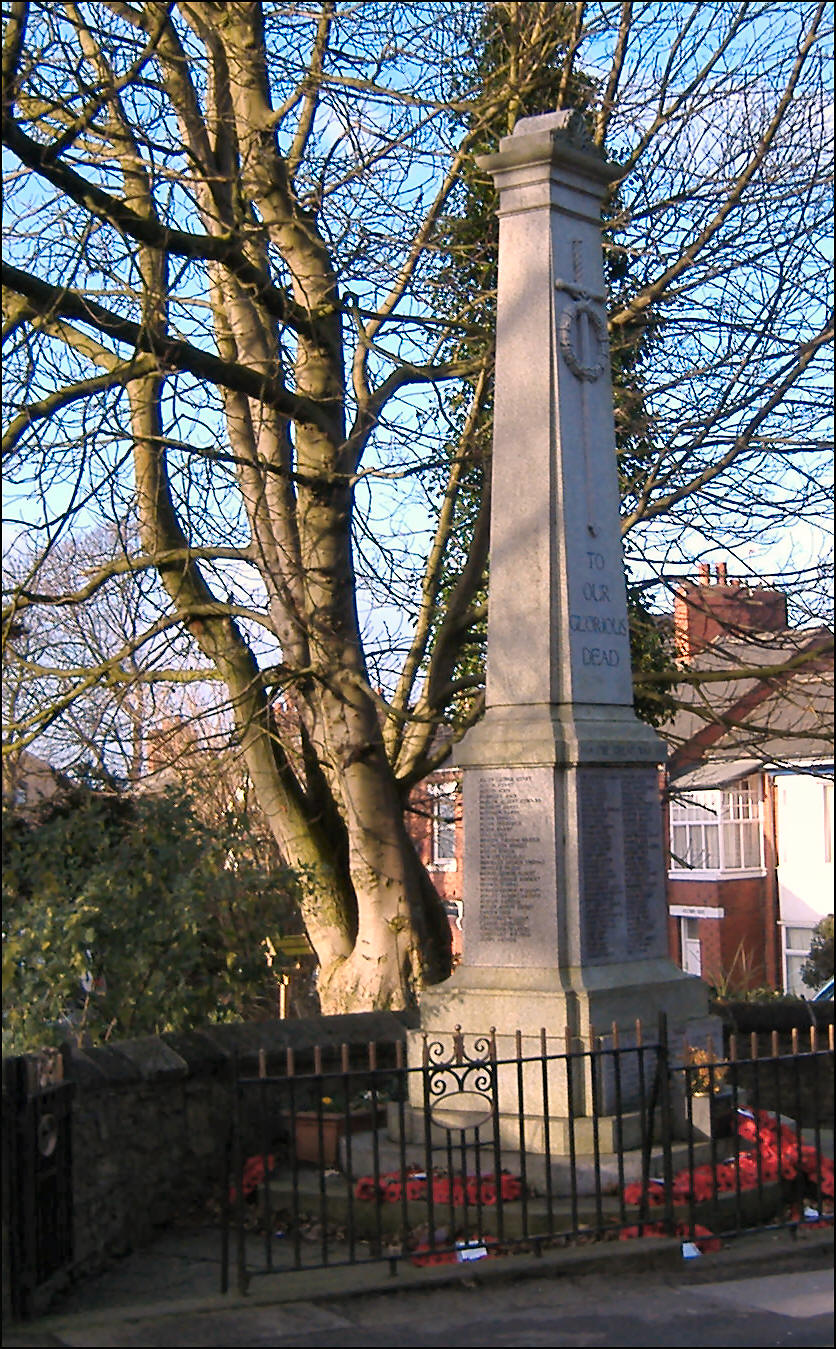 Henry is also commemorated on the War Memorial in Audley. 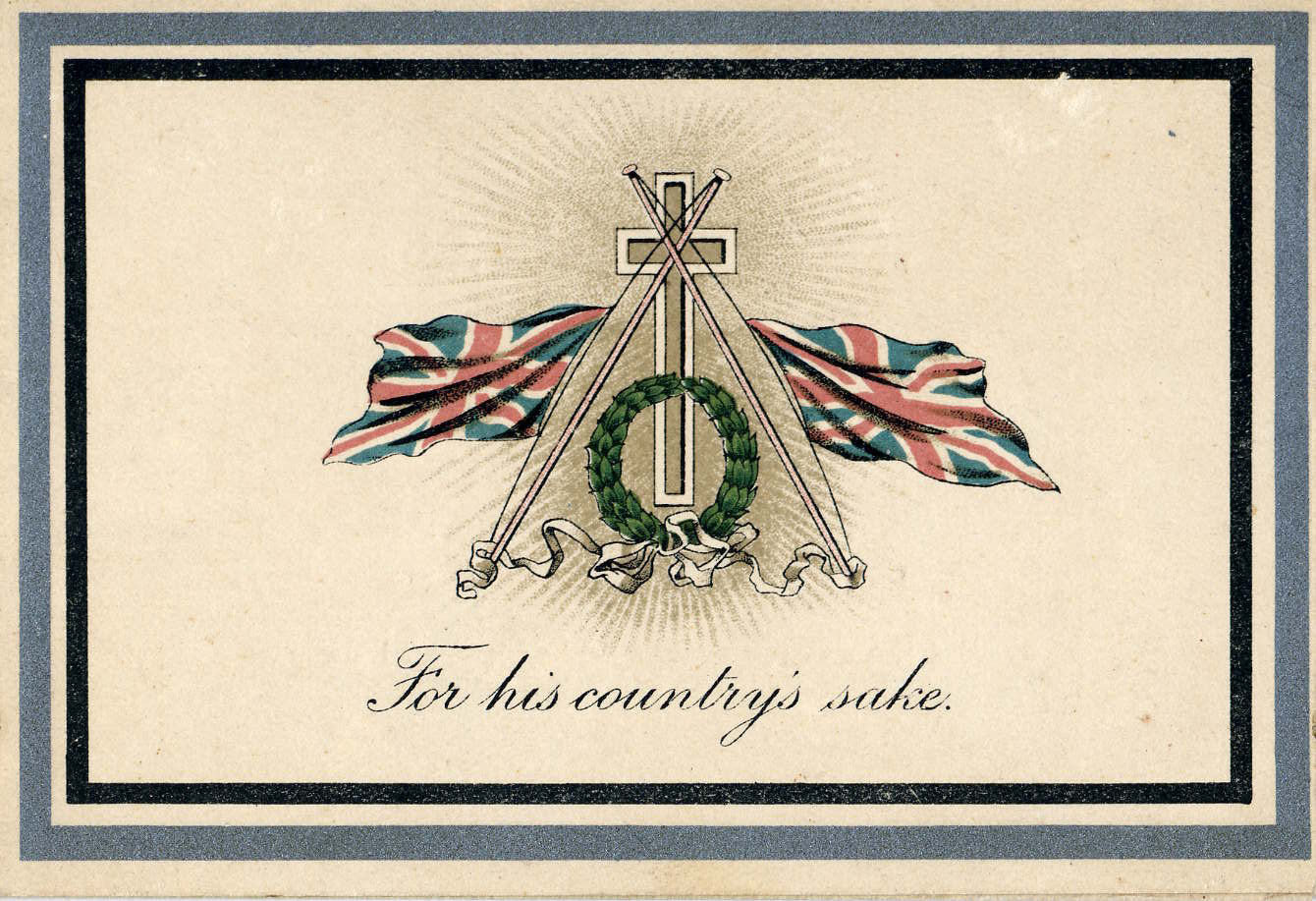 Mrs Charlotte Lee , his niece, heard her parents talk about Henry often, especially her father, Tom, who was his eldest brother. Three brothers went to volunteer: Tom failed because of his eyesight, while Bill and Henry went into the army. They were not allowed to go in the trenches together, as brothers. Bill went out in daytime and Henry at night, but he didn't come back and his body was not found. Tom and Henry were good friends, going out as a foursome with their girlfriends. Henry's girlfriend. Jenny Warrilow never married. The family was informed of his death by another local soldier, named Beckett. who heard as he came away on leave that Henry hadn't returned: so the family knew before they were notified by the War Office.

See notes at foot of page.

This following information is taken from the war diaries of the 9th Bttn North Staffordshire Regiment (Pioneers) and is for the month of November 1916 in which Henry was killed, and shows the movements and work Henry was doing up to and including the day he died.This information was kindly supplied by the Staffordshire Regiment Museum with a special mention to Jeff Elson for his help in transcribing some words and providing some very useful information.

It should also be noted that the same diaries apply to William, his brother. 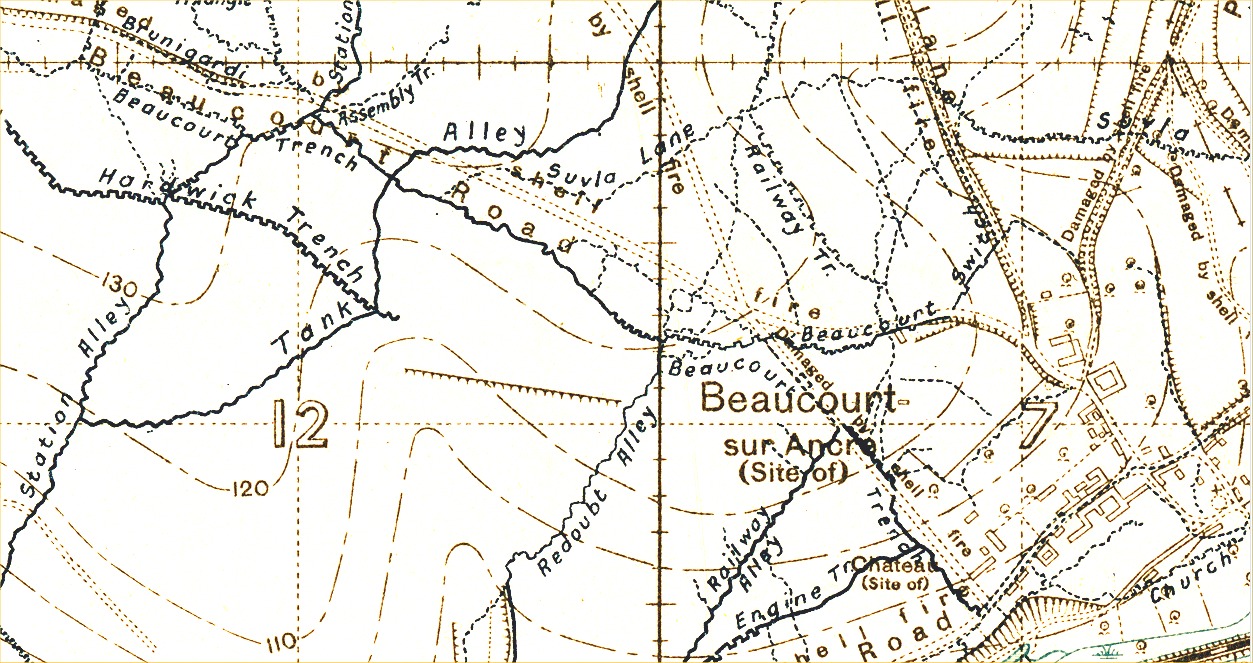 
Two dates are given for Henry's death - the war graves commision gives November 24th but the memorial card reads 20th - 21st November. Here are some notes and thoughts to try and clarify the true date.

If Henry died on the 24th November he seems to have died wiring the Beaucourt trench above. If he died on the 20th November which I favour he seems to have died wiring 130 yards of Hollande. I have no trench map for Bois d'Hollande but Bois d'Hollande is a small wood about 900 yards ENE of Beaucourt on the north bank of the Ancre, to the north of the D50 Beaucourt to Miraumont road.
The Royal Naval Division fought over this ground in early 1917.

Further information:- Concerning the night of the 20th November 1916 and the death of Henry Austin, David Amos and an unknown soldier (possibly Arthur L Burrows).

A Mr Gerald Amos contacted me having seen my web site to supply the following story which was passed down the family by David Amos's grandson George Amos.

Talking to a man who was there, years later. my Grandfather went out on a night patrol under continuous shell fire, a trench was approached, it did not appear to be occupied, 3 volunteers were asked to go and check, no one volunteered, so the first 3 men whose surname began with A were told to go, my Grandfather was one of the 3, as the men were approaching the trench, a shell exploded by them and killed all three.

See war diary entry for November 20-21 and November 24 above.

Since receiving this information Myself and Gerald Amos have done further research but the nights of November 20th - 21st and November 24th still contain confusion.
(I am amazed that such detailed records were kept in such awful conditions) but after checking as many records as possible and Gerald spending time at Litchfield barracks and the Staffordshire regiment museum with the curator.

This is the outcome that we believe.

Looking at the war diaries for 24th November only one private died that night and private Alfred Green 12337 is listed as dying on this date.

This then puts Henry dying on the 20th November and making the fact that : The family was informed of his death by another local soldier, named Beckett. who heard as he came away on leave that Henry hadn't returned: so the family knew before they were notified by the War Office.
The third part of the evidence ( another soldier with the surname A ) who died on the same night cannot be found.
Perhaps a still more convincing argument for the death being on the night of November 20-21st 1916 is the fact that his brother Bill (William Austin) was in the same Regiment in the same place and surely he would have known the details of his brothers death, and perhaps it was Bill who asked the soldier named Becket who went home on leave to visit his parents and give them the sad news of his brother.
I offer my thanks to Gerald for his research.

One final thought must go to Bill who had lost his brother and still had to carry on with all the emotions of this event plus the brutality of the war. 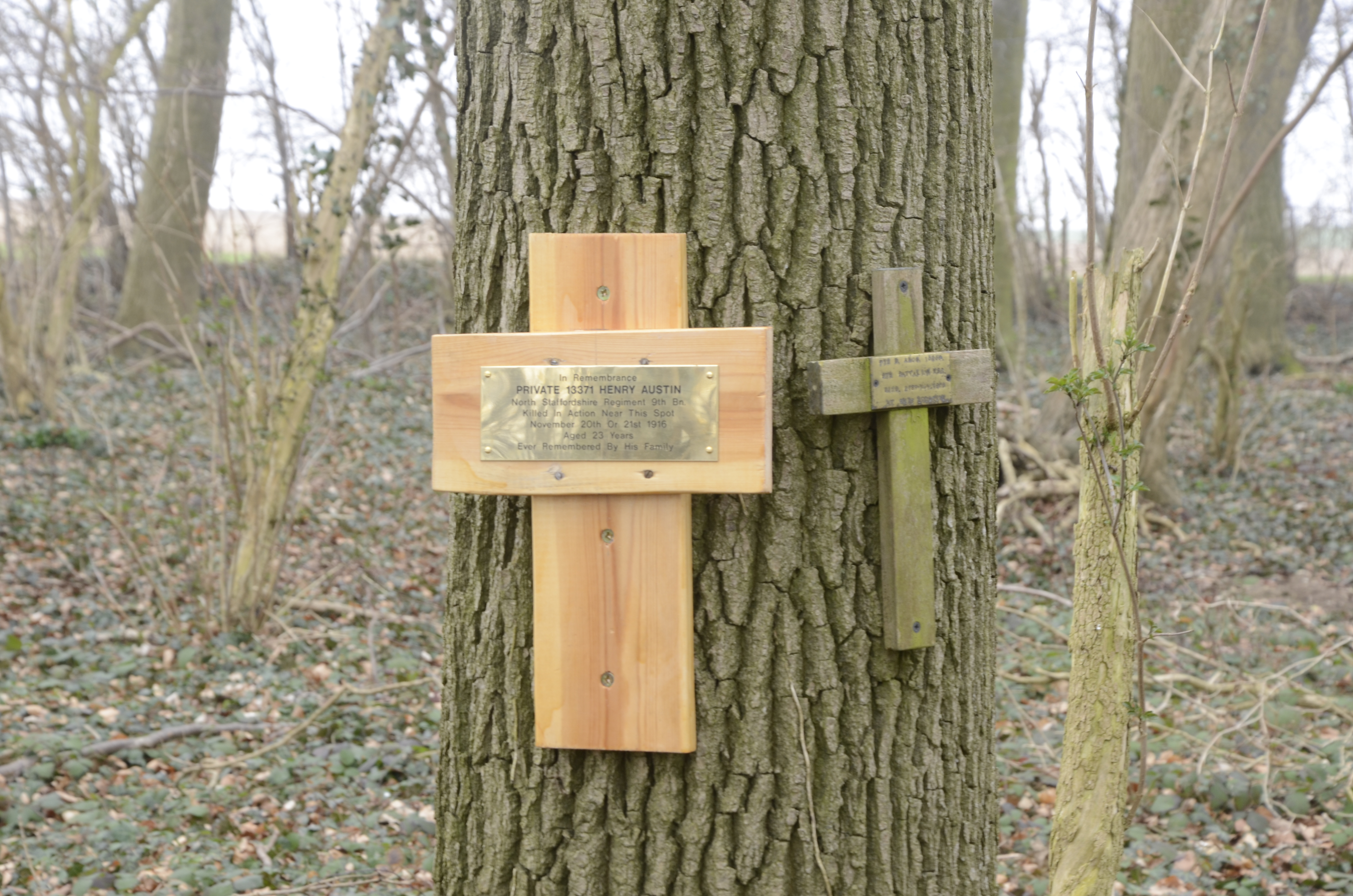 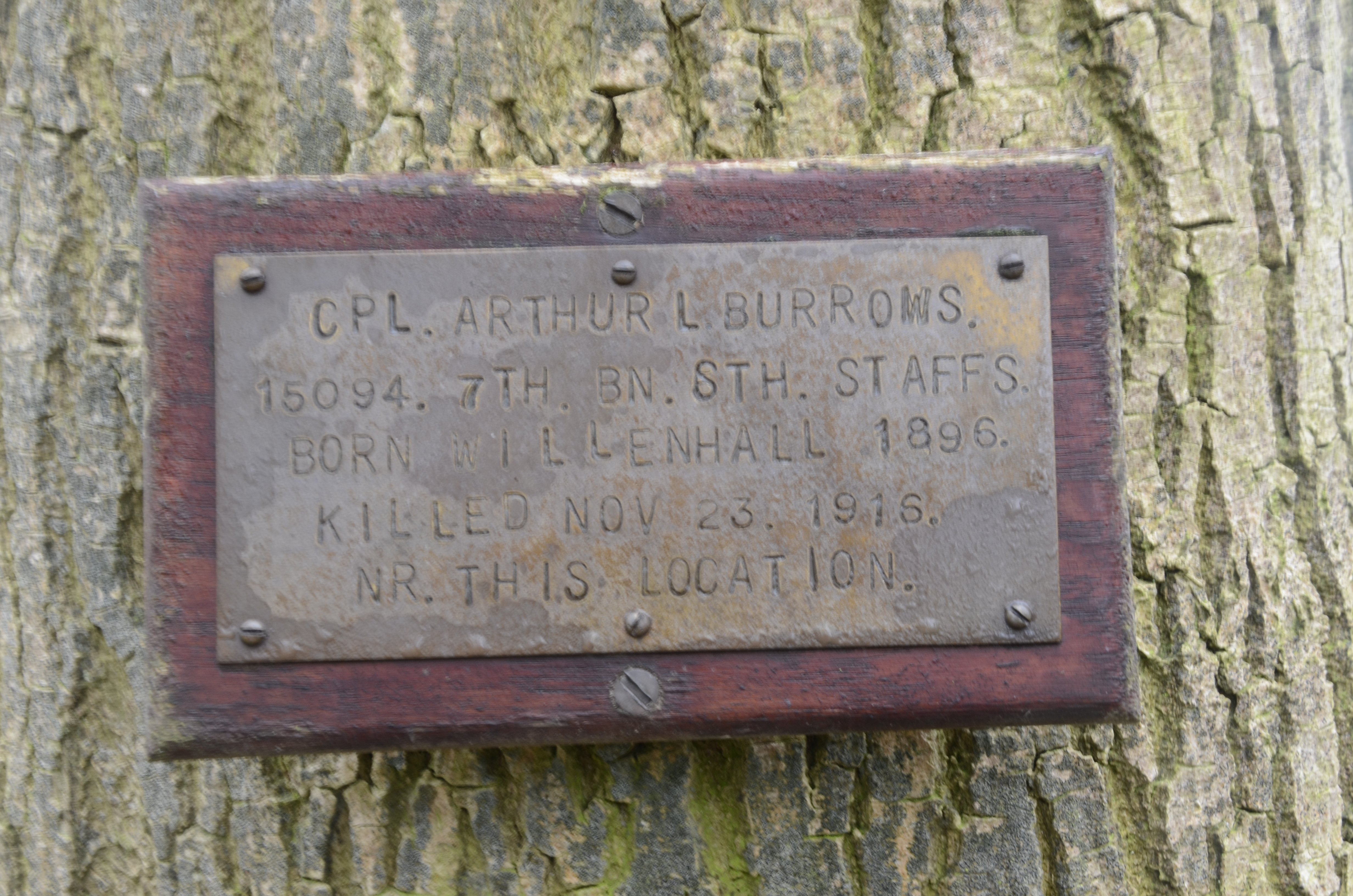 I travelled to France in March 2015 and placed a cross in memory of Henry Austin on a tree in Bois D Hollande next to a cross to David Amos, I also found a cross to Arthur Burrows who also died near this spot on 23rd November 1916.

A final thought is that Geralds story related above is correct but most probably there were not three soldiers with a surname begining with A so perhaps the next man in alphabetical order would have been Arthur L Burrows.

This ties things together although the war diaries for November 20th states (3 Pts “C” Coy killed) but Arthur Leslie Burrows was a Corpral. Bois D Hollande from the road. 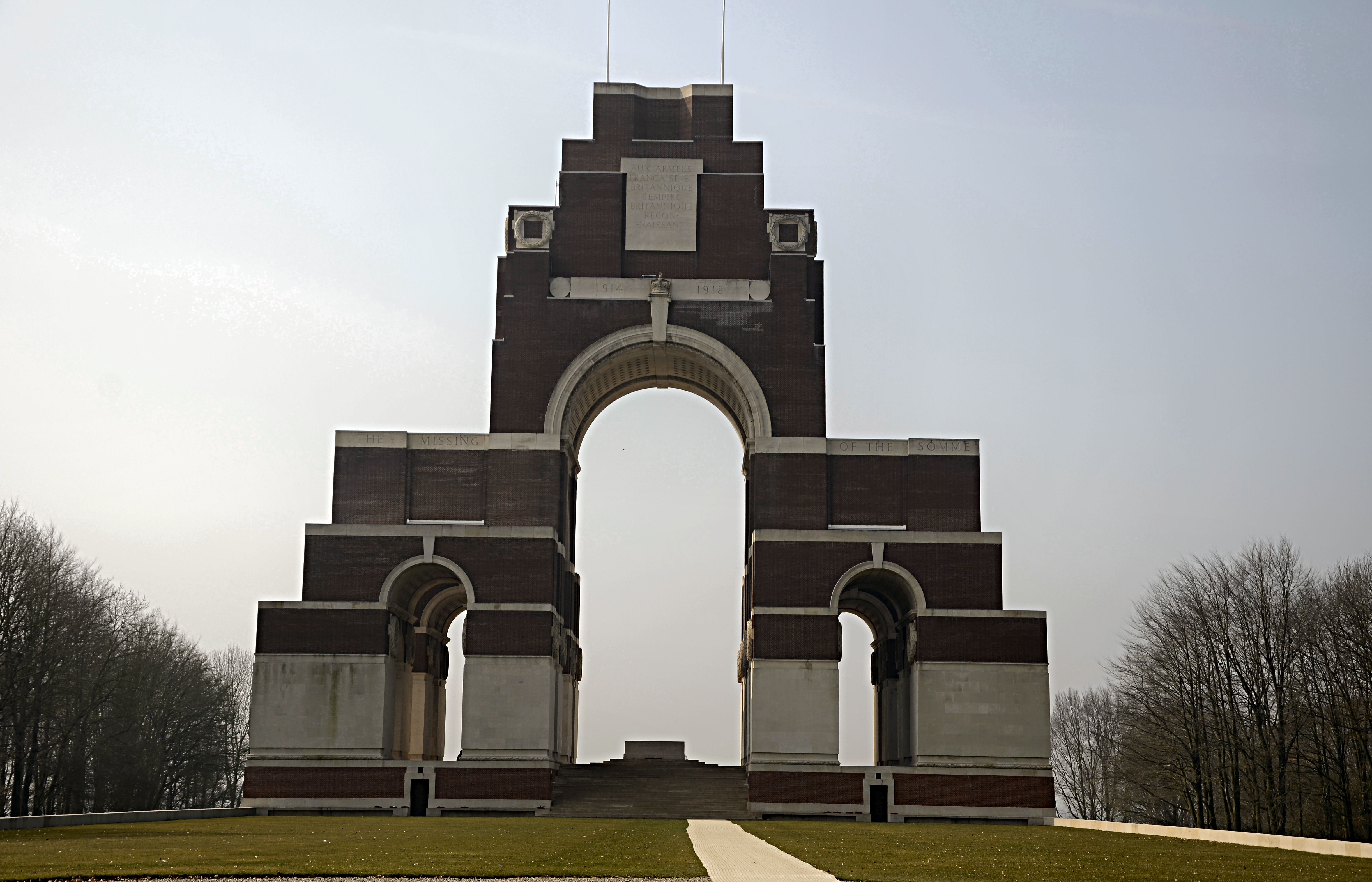